Citymark Capital celebrated its second annual investor meeting.  This event, held at The Hilton Cleveland Downtown, marked another year of impressive accomplishments for Citymark.  We’d like to thank our speakers and the approximately 130 people who attended.

We heard from top economic experts, top housing experts and 2017 Nobel laureate Richard Thaler after a warm introduction from Barbara Snyder, President of Case Western Reserve University.  A recap of the main messages from each of these experts is below.

Here are some updates from Citymark Capital: 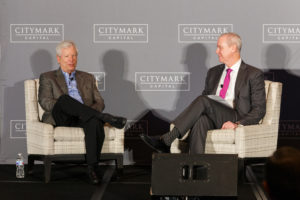 We were thrilled to have the recipient of the 2017 Nobel Economics Prize, Richard H. Thaler, as our keynote speaker. Citymark had the honor of conducting an interview-style, hour-long conversation with Dr. Thaler on stage, followed by a Q&A with our audience.

Dr. Thaler lived up to his reputation for being both entertaining and informative. He began by sharing the fateful moment when he found out he had won the prize. The call came in at 4 a.m. on his landline, which was on his wife’s side of the bed. She answered it but the handset died. As she was rousing him from a deep sleep, his cell phone rang. The caller ID said “Sweden,” which gave him an inkling of what was to come. Still, he said the person on the other end of the line began the call going out of their way to convince him the call was not a hoax. “I can’t imagine hating someone enough to pull that stunt,” Thaler said.

Thaler went on to share several interesting stories about his research and work, most with lessons broadly applicable to business. One story involved a consulting assignment with a CEO and 23 business unit leaders. Thaler asked the business unit leaders: “Suppose I offer you an investment where you have a 50% chance of making $2 Million or a 50% chance of losing $1 million. Would you take it?”

Only three of the 23 business unit leaders raised their hands. But when the CEO was asked the same question, he said he’d pursue all 23 opportunities because the collection of opportunities was almost certain to generate at least $11.5 million in additional profit.

It was revealing to the CEO that most of his team either didn’t understand risk assessment or were too risk averse. The lesson, according to Thaler? “You need to create an environment where people understand risk, understand that you’re going to have failures, and that it’s OK to take chances.”

Other Thaler lessons and predictions:

All agreed that demographic trends will continue to drive strong demand for multifamily housing, making it likely to be one of the most favorable of all real estate investment segments over the next several years.

Bibby referred to the NMHC Vision 2030 report which found 4.6 million new apartments will need to be built by 2030 to keep up with growing demand.  Demographic trends driving the demand for rental housing include:

“People have to live somewhere, and 36% of them will live in rentals,” said Shekar Narasimhan. “When looking at risk adjusted returns of multifamily, where else can you get that kind of return on investment?” said Mike McRoberts. 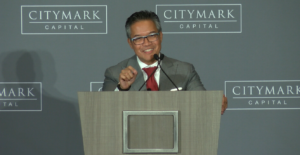