How Daniel Walsh, and his investors, are making money 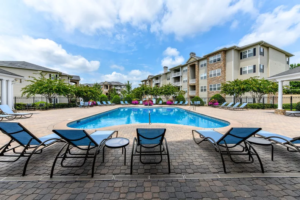 But the fact the portfolio engaged buyers from large institutional investors like The Blackstone Group may be the most telling takeaway for what it says about the future of the real estate market and Citymark’s strategy for making money in it — even when the markets see another downturn.

The Cleveland firm specializes in buying multifamily apartments, potentially anywhere in the United States. Walsh said Citymark has been pitched on more than $10 billion worth of deal flow over some 700 deals vetted so far since its first fund formed in 2016.

But the investment strategy calls for doing that in markets that meet specific criteria. Among them, at least $1 billion in apartments sales annually, strong population growth plus average rent costs lower than other markets — and competing nearby properties — when compared to incomes.

The acquired properties are improved with the help of operating partners such as InterCapital Group, which may do anything from upgrading floors and countertops to adding new common areas and community events, all before increasing rent (but keeping it below roughly one-third of renter income on average).

“From an affordability standpoint, we’re going in, improving the interiors, improving the amenities, putting in new exercise facilities, fixing up the pool, adding firepits and creating a sense of community,” Walsh said. “And then we bring in professional managers to program it.”

The properties then are sold off for what so far, Walsh said, have been market-beating returns, though he declined to disclose specific details.

“We feel like we are creating portfolios to sell to global buyers,” Walsh said.

Citymark has already been working on raising its second apartment buyout fund, which has a maximum size of $250 million, according to filings, but is targeting $150 million. A couple of deals already have been made through that.

Citymark most closely vets deals for apartments in the top 50 up-and-coming real estate markets where incomes are growing faster than rent. That includes states such as Nevada, Texas, Arizona, Georgia and Florida.

Walsh and his director of investments, Jerel Klue, most specifically seek out value-add apartments with at least 300 units of a 1990s vintage or newer, then select an operating partner like InterCapital to manage the facilities.

“It never fails that if we take a good property and make it nicer, people are willing to pay a little more to live there,” said InterCapital CEO Edward Biskind.

InterCapital is key because of its wide portfolio, which offers the scale for completing renovations at a market discount.

“The nice thing is, since we don’t have 30 offices around the country trying to build these portfolios, we can rely on those operating partners to help us build a diversified portfolio both geographically and by sponsor,” Walsh said.

Property values increase as renovations are made and rents rise, though never beyond one-third of the market for renters’ average income. That, Walsh said, helps increase the likelihood that tenants don’t move out. Citymark typically acquires properties where occupants are spending 21% of income on rent.

Other real estate investment groups will take a similar approach, but they don’t usually focus so specifically on those value-add, multifamily apartments the way Citymark does.

“It’s a niche we carve out we think we are the most effective at executing in,” Walsh said.

The sweet spot for Citymark are deals between $25 million and $100 million, which is not the top end on which larger funds are focused, but is bigger than the deals buyers in local markets typically go for.

For one, they tend to be highly insulated from interest-rate movements since leases are usually between six and 12 months. In the event of rate increases, rents can be raised more easily as compared to units with much longer terms of several years or more that would be locked in.

Several other economic factors could create some tailwinds for the Citymark strategy as well.

Walsh pointed to economists who say today’s average renter is 32 years old. More people in that range will be moving through the economy in the next decade, increasing the potential supply of renters with families.

“What we are really seeing across this cycle more than the last has been development of high-end apartment projects,” said Ryan Reid, vice chairman with real estate investment group CBRE Group. “There is a large number of folks who cannot afford single-family homes, so that really fills a niche of what most cities in America need: affordable housing.”

Meanwhile, if a recession occurs in that time, which is all the more likely when considering the prolonged economic growth seen at this point in the cycle, that might lead to an increased supply in renters as well.

That’s all the more relevant for Citymark, which tends to invest in Class B properties. If a recession hits, people in Class A properties might move down to the B class.

There are also more people exiting college and more people heading toward retirement, which bodes well for the renting trend.

“So if you think about the next 10 years and the possibility of some kind of recession, our demand is built in in such a way that the apartments should perform very well,” Walsh said. “They will stay full. And we’ll be able to distribute cash flow to investors during that time.”

Walsh is essentially re-creating an investment business he built at KeyBank 20 years ago. He worked at Key for 13 years before joining Huntington Bank in 2010 as Cleveland market president, a position he left in 2015 to start Citymark.

Walsh said he’d love to do some kind of deal in Cleveland, but the market simply doesn’t fit his investment criteria right now.

There isn’t $1 billion in apartment sales in Cleveland (though Columbus recently hit that mark) and there aren’t many large, institutional buyers for what Citymark would be selling.

That could eventually change as the apartment supply builds up. Walsh pointed to projects such as The Lumen at Playhouse Square — which has been described as the largest residential project in downtown Cleveland in four decades — and the mixed-use high rise at One University Circle as examples of that.

He did indicate he has eyes on the Opportunity Corridor, but it’s much too early to evaluate what might play out there.

“I’m excited for Cleveland, and I do think there is opportunity there that could accelerate (that path to $1 billion in annual apartment sales),” Walsh said. “It’s a more long-term investment because you can’t sell it if you want the full tax benefit. But it could seed the apartment stock for the next generation to get Cleveland to an institutional level.”